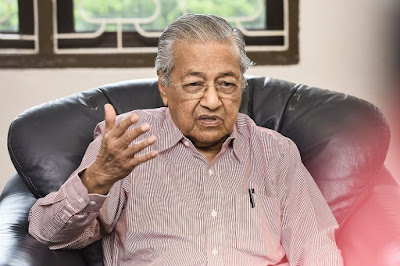 KLANG, Jan 26 — Prime Minister Tun Dr Mahathir Mohamad today said the situation of the coronavirus (2019-nCoV) outbreak in the country is not at a critical point, to stop Chinese tourists from entering the country.

In a press conference at the Klang Hokkien Association here, Dr Mahathir said that the important step to observe is prevention, adding that the border authorities would actively screen all inbound travellers for any symptoms of the disease.

“We cannot predict at this moment. Many countries face the same problem. We will also have to assess when is the critical stage, but at this moment it is not yet critical to the point where we need to top tourism,” Dr Mahathir said when asked if the government would enforce drastic measures, similar to the Philippines, which reportedly deported 500 Chinese tourists.
“Well you can send them back to China, but in the process of sending them back, they will come into contact with other people. It is better to quarantine them first until they show no signs, then we can send them back,” he said.
Dr Mahathir lamented that it is simply vexatious to stop people from travelling and expressed hope that there will soon be a system to “isolate very quickly, and also work on producing a vaccine for the treatment.”
He said it is also not possible to quarantine travellers from China or other nations affected by the Coronavirus disease upon arrival to Malaysia, regardless of whether they display any symptoms or otherwise, owing to the sheer volume of people.
“Tourists from China sometimes increase to two million. Where are we going to keep them? In the cowshed? Don’t tell me that’s how we are going to do it.
“For those who have symptoms or display just tiny signs already, we quarantine them,” he said, after attending a Chinese New Year celebration here.
Earlier today, an online petition was launched urging Putrajaya to ban Chinese nationals from entering the country, with some 149,000 in support of the call.
The petitioner named Muhammad Zaim Yusran Mohd Zaidy said there was an urgent need to prevent Chinese nationals from entering the country due to the recent outbreak of Coronavirus (2019-nCoV).
To date, health officials are still finding the exact origin and cause of the 2019-nCoV.
Cases of 2019-nCoV have been confirmed in Japan, South Korean, Thailand, Macau, Singapore, the US, France, Vietnam and Hong Kong.
Malaysia yesterday recorded its fourth case of coronavirus, the latest being a 40-year-old man from Wuhan, China, who arrived in Johor Baru on Wednesday, via bus from Singapore.
The man had come in with a group of 17 Chinese tourists in total, which also included his wife and child.
On January 24, China’s central government ordered travel agencies to suspend sales of domestic and international tours in a bid to contain the virus outbreak.
The Chinese government had already imposed travel restrictions into Wuhan and a dozen other cities, restricting the movement of some 56 million people to contain the outbreak.
On the same day, the Philippines government had sent back 500 Chinese tourists who came from Wuhan.
North Korea had also banned all foreign tourists following news of the outbreak.
Similarly, dozens of other countries have advised their citizens to cut all non-essential travel to Wuhan.