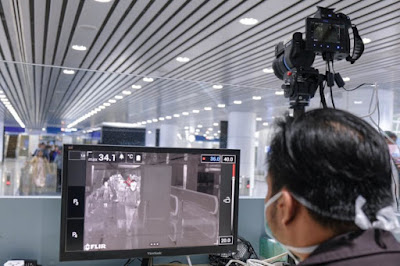 Of the total, 22 were Chinese nationals, seven from Hong Kong, six from Indonesia, four from Brunei and one each from Great Britain, Japan and Singapore. — Picture via Facebook/ Noor Hisham Abdullah

KUCHING, Feb 7 — The Sarawak Immigration Department has refused entry to a total of 42 foreigners at its visitor arrival screening points from February 1 until 7am this morning, the State Disaster Management Committee on 2019 novel coronavirus said.

In a statement today, the committee said the screenings were done at the airports in Kuching, Sibu, Bintulu, Miri, and Mulu, as well as the Immigration, Customs, Quarantine and Security (ICQS) border checkpoints at Biawak near Lundu, Sungai Tujoh (Miri) and Mengkalap (Lawas).

“Of the total being refused entry, 22 were Chinese nationals, Hong Kong (seven), Indonesia (six), Brunei (four) and one each from Great Britain, Japan and Singapore. They were refused entry as their passports had shown that they had been to China within the last 14 days,” it said.

Meanwhile, the State Health Department recorded six new Patients Under Investigation (PUI) cases until 10.30 am today, where five of the cases at the Sarawak General Hospital here and one at the Bintulu Hospital.

The new cases brought the cumulative PUI cases in the state to 46 since Jan 10.

However, 34 cases had been found negative for infection, while results for the remaining 12 were still pending laboratory tests. — Bernama