Malaymail : Amid speculation of new coalition, Mujahid urges Pakatan to not to give in to ‘desperados 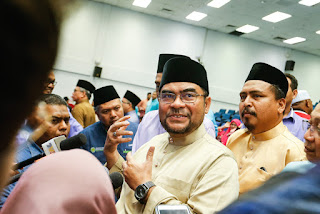 KUALA LUMPUR, Feb 23 — Minister Datuk Seri Mujahid Yusof Rawa has taken a swipe on Twitter at those he labelled as the “backdoor gang”, questioning their motives over an apparent attempt to form a new government coalition.
Mujahid, who is also the Parti Amanah Negara vice president, has also expressed trust and faith that Prime Minister Tun Dr Mahathir Mohamad and Pakatan Harapan (PH) leaders would make the right decision.

“Move on lah actually, this backdoor gang looking to save themselves or save the country??

“You drag an entire nation into your narrow agendas? I am confident [Dr Mahathir] and the PH leaders will respect and defend the decision,” he tweeted.
Mujahid also suggested the move to form a new coalition was the move of “desperate people doing desperate things” and urged PH leaders not to give in to such people.

He then suggested that the decision of PH’s presidential council concerning the transition of power meeting during their meeting on Friday was clear and should be respected and followed.

“There are parties who were not satisfied and are trying to take advantage [of the situation] as though they have forgotten the people’s mandate. Let us not be turned away from the main focus of the decision.

“Everyone is asked to calm down and remain focused on the people’s agenda and not the agenda of desperados,” he wrote.

Malay Mail has previously attempted to get Mujahid’s comments on the developments today, but was unsuccessful.

Other Amanah top leaders have so far stayed mum as well.