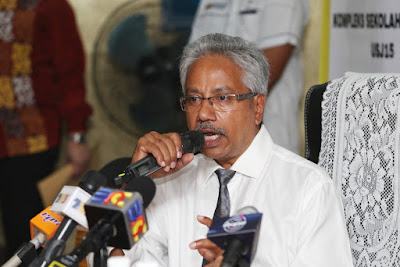 ROMPIN, Feb 18 — The federal government is to help the Orang Asli community here lead a more comfortable life, Senator P. Waytha Moorthy said today.
The Minister in the Prime Minister’s Department said one form of assistance is to gazette Kampung Bukit Biru here as an Orang Asli settlement for the Jakun community which established the village.

He said the matter of land was a major concern raised by the villagers during a dialogue he had with the villagers at their settlement, located seven kilometres from Bandar Muadzam Shah.

“The villagers come here to earn some income by looking for recyclables at the nearby Bandar Muadzam Shah landfill and have asked for their settlement to be maintained and gazetted.
“We discussed the status of the (village) land with the district officer and, if there is no overlapping claim, the Department of Orang Asli Development (Jakoa) can apply to have the land gazetted because land matters come under the jurisdiction of the state (Pahang) government,” he told a press conference at the village here.

Waytha Moorthy said the gazetting of the settlement will also help find a long-term solution to the problem of water and electricity supply and added that, as a temporary measure, Jakoa will set up a tank and send clean water every week.

Furthermore, he said, a company will be sought to install a solar power system in the village pending a permanent solution to the electricity supply problem after the gazetting of the settlement.

He also said that villagers who seek additional income by looking for recyclables at the landfill will be prohibited from pursuing such activity due to risks to their health.

“Alternatively, we will help them engage in economic activities such as agriculture that can provide them with a better income and security,” he said.

The minister said arrangements will also be made for a number of the villagers to be absorbed as workers at the landfill.

Waytha Moorthy said Jakoa will also help the Orang Asli children not attending school to get an education and even provide them with transportation.

A villager, Jamida Calong, 52, who attended the dialogue said it was hoped that the gazetting of the Orang Asli settlement can be done immediately.

“I am one of the earliest people to settle down here. It has been over 10 years. This place is located close to the main road. The houses have been built and the settlement is close to the town,” Jamida said when approached after the meeting with the minister.

Rasa Lian, 31, said it was hoped that the gazetting of the land can enable the villagers to enjoy basic amenities like those in Orang Asli settlements elsewhere.

Rasa, who looks for jungle products, expressed interest in the job offered by the government in agriculture and wanted to know more about it. — Bernama