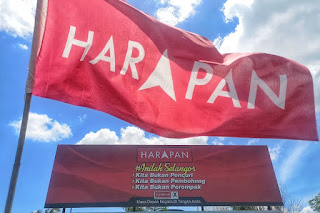 According to Pemanis assemblyman Chong Fat Full, a new coalition will replace the current Pakatan Harapan. — Picture by Shafwan Zaidon

“This is not the first time discussions took place regarding the new coalition. It has been discussed for quite some time.

“The new coalition will be named Perikatan Nasional, and would include several leaders from DAP, Amanah (Parti Amanah Negara), GPS (Gabungan Parti Sarawak), Umno and PAS,” said Chong when met by reporters at the Sheraton Hotel here before entering a meeting with several other PKR members aligned to Azmin.
He, however, said this was pending meetings still being held at the time of writing.

Chong also clarified that earlier reports PKR members aligned to Azmin would leave the party were not true.

“Those aligned to Azmin have no intention to leave the party. We will remain with the party until and if we are sacked by party president Datuk Seri Anwar Ibrahim,” he said, reaffirming members’ support for Prime Minister Dr Mahathir Mohamad.

He added that if these members are sacked from the party, they will either join existing political parties like Parti Gerakan or form a new party.

“The meetings that are taking place today are the result of Friday night’s decision made during the PH presidential council.

“Most likely something happened during the meeting which pushed Dr Mahathir to take these actions,” he said.

Chong also confirmed Dr Mahathir’s meeting with the King at 6pm today, and said a press conference would probably be called at 8.30pm. He, however, did not reveal the venue of the press conference.

Speculation about the change of government went into overdrive today after the major political parties arranged impromptu meetings, after the PH presidential council met to discuss the contentious power transition on Friday.

On Friday, Bersatu warned that it could leave PH after some leaders tried to make Tun Dr Mahathir Mohamad fix a date for when he will step down as the prime minister.

Aside from the “cartel” as the pro-Azmin faction are sometimes called, Umno as well as GPS (formerly Sarawak Barisan Nasional) are also meeting in the capital.