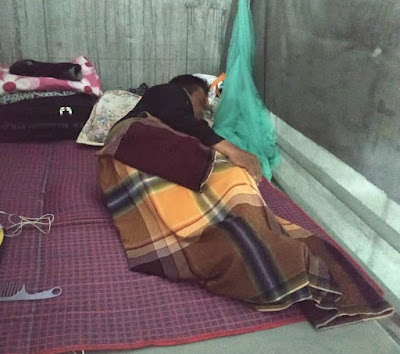 Foreign workers are alleged to have been left to their own devices without proper food and medical attention. — Picture courtesy of M. Gunasekar

KUALA LUMPUR, Feb 18 — The Protect Taman Desa Coalition today shared several photographs and videos of foreign workers it claimed were “abandoned” at the site of The Address condominium project that suffered a structural collapse.
The coalition’s media coordinator M. Gunasekar claimed in a statement today that the workers were living there without food and healthcare after the developed Maxim Holdings was ordered to stop work at the site.


“The construction company involved in the construction of the collapse site has allegedly abandoned migrant workers to fend for themselves. A big number of foreign workers were seen inside the site without proper food and medical attention.

“The surrounding condominium resident, whose foreign maid was in contact with the workers says there are a number of workers stuck inside the project site with no food or pay. Residents from the surrounding condominiums are doing charity drive to feed them. Apparently, a number of workers with injuries are also not treated for their injuries,” Gunasekar said in a statement.
He urged the Human Resources Ministry, the Local Government and Housing Ministry, the Immigration Department, and the Department of Occupational Safety and Health to investigate.


However, The Address project manager Seymour Chew denied the allegation when contacted by Malay Mail.

“Actually, my people, all the management people are still at the site.

He also said he will look into the residents’ claims.

A section of the condominium collapsed on February 14 following heavy rain.

Two workers from Bangladesh had been trapped but were later rescued and sent to Hospital Kuala Lumpur for treatment before being released.

The Address, a 202-unit, low-density residential project on a rise next to a public school began construction at the end of 2017.

It is opposed by Taman Desa residents who complained of noise pollution and accused the developer of ignoring construction conditions set by the Kuala Lumpur City Hall.

This is not the first time the project has suffered construction problems.

On January 23, 2018, a crane at the site fell over and damaged the adjoining Tiara Faber Condominium.

On February 15, Malay Mail reported that construction workers at the project were seen moving out of the building site.

They were seen carrying mattresses, rice cookers, table fans, adapters, toiletries and clothes, and loading them into their respective e-hailed transportation.

A worker who did not want to be named said all those staying there had to vacate their living quarters.